Save for Later
SIMILAR BOOKS Show All
Weber, Karl E. 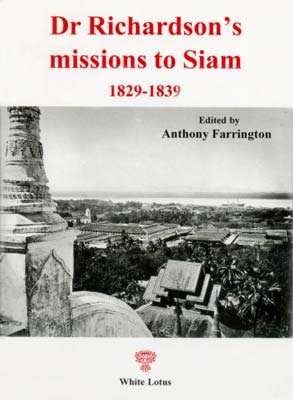 Dr Richardson’s manuscripts survived in the East India Company’s archives and in the contemporary Journal of the Asiatic Society of Bengal. Anthony Farrington has now brought them together for the first time. They contain a wealth of information on Chiang Mai, Lamphun and Lampang, parts of the country, which were completely unknown to Europeans, as well as fascinating encounters in Bangkok at a crucial period in the history of early modern Siam. David Richardson (1796-1846), a surgeon in the English East India Company’s Madras Army, was posted to Moulmein when the Company seized the Tenasserim Provinces at the end of the First Burmese War. One of the first British officers to become fluent in Burmese, his skills were diverted into various diplomatic missions. Between 1829 and 1839 he made four remarkable pioneering journeys overland into Siam