Impressions of the Siamese-Malayan Jungle:

Save for Later
SIMILAR BOOKS Show All
Chaiwat Satha-Anand

Pattani in the 1980s: Academic Literature and Political Stories 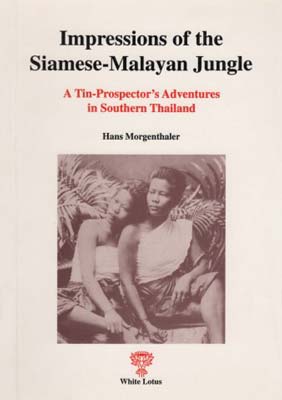 Impressions of the Siamese-Malayan Jungle:

A Tin-Prospector's Adventures in Southern Thailand

An important book on the internal turmoil and struggles of a young expatriate working in Siam. The book covers the period 1917-1920, when the First World War is devastating Europe and many questions about the fate of humanity are raised. The book is a study in character, both of expatriate behavior and of Siamese rural people that may be compared to the now famous A Woman of Bangkok in its focus on the discovery of Eastern womanhood. Hans Morgenthaler’s often witty, soul-searching writing, published in the first Swiss edition, was so controversial that the British version was censored. The censored pages, recovered in the introduction, though innocent today, clearly reflect the flavor of the time as does the whole work-atmosphere of this geologist exploring Southern Siam for tin and gold. The exploration of the vast wealth that tin-mining promised and also delivered later in the south, was a source of deadly conflicts in which the young man soon found himself entangled. While the work of this geologist clearly drives him to his beloved, lonely jungle rivers, nowhere are the clashing values of a Westerner, confronted constantly with willing Siamese, clearer than in his loving words about the village people. As a character study of a Westerner trying to cope with Eastern realities, this book is as relevant today as it was three quarters of a century ago.