Rise and Fall of the Thai Absolute Monarchy

Save for Later
SIMILAR BOOKS Show All
Matichon Weeekly 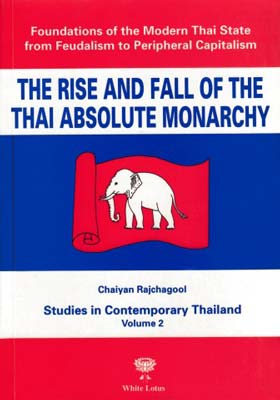 Rise and Fall of the Thai Absolute Monarchy

Foundations of the Modern Thai State from Feudalism to Peripheral Capitalism. Studies in Contemporary Thailand No. 2
This is no ordinary study of nation building. It differs markedly in its theoretical approach from existing studies of Thailand. In the mid-nineteenth century, Siam was no more than a loose grouping of petty states and principalities, lacking well-defined borders and a centralized power structure. Yet within a period of forty years a unified state had emerged. How and why had this happened? Those are the questions addressed by this penetrating study. It is central to the author’s argument that the form of the new state was the absolute monarchy. He analyzes the socioeconomic conditions that existed at the time of Siam’s early contact with Western economic and colonial forces and examines the ways in which political and administrative control gradually came to be held by the Bangkok-based monarchy. The author also addresses the question of why, within another forty years, the absolute monarchy had been replaced by a constitutional monarchy.