Tending the Spirits: The Shamanic Experience in Northeadtern Laos

Save for Later
SIMILAR BOOKS Show All
Escap

USD 35.50
Subcommittee On US Security Agreements and Commitments Abroad, Committee On Foreign Relation

The Head Man of Na Ang 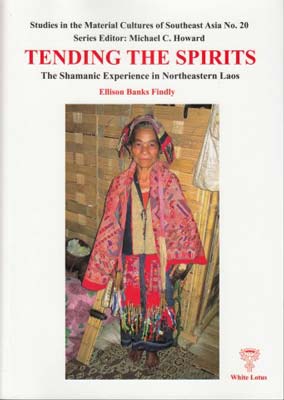 Tending the Spirits: The Shamanic Experience in Northeadtern Laos

Studies in the Material Cultures of Southeast Asia No. 20

This study of shamans in northeastern Laos details the call, training, and ritual practice of female and male healers, as well as of male funeral shamans who guide the deceased's spirit to heaven. Based almost exclusively on interviews with shamans and weavers in mountain and urban villages of Hua Phan province, Tending the Spirits: The Shamanic Experience in Northeastern Laos does what no other book has done before. It draws information almost entirely from the oral tradition of the shamans themselves, illuminating the multivalent complexities of belief and practice as they evolve over time. The relation between the shaman and the weaver is a symbiotic one, with the shaman chanting out visual images in his trance narrative, and the weaver translating what she hears into mythic, hybrid images on the loom. Thus the powerful, transformative ritual textile is born. Using the work of Michael Winkelman, the author draws on understandings of the neurognostic structure of the shamanic flight and of the trance's internal imagetic flow to connect Lao-Tai spirit religion to patterns of shamanism in other parts of the world. Unfortunately, Lao-Tai shamanism is today at a cross-roads: global connections and the incursion of things like western medicine may render some of the practices obsolete. The shamans themselves, however - female and male alike - believe that both the healing and funeral traditions can adapt to modern times, and can continue to serve the Tai populace they have benefited for so long.