Among the Burmese in 1902: French impressions of a Buddhist Country

Behind the Burma Road

Notes on Birds of the Irrigated Area of Shwebo District, Burma (Part 1) 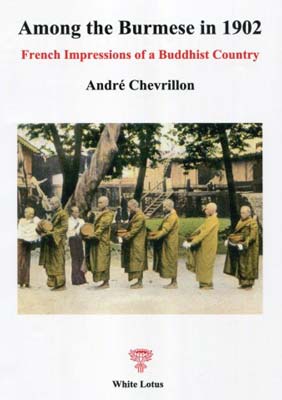 Among the Burmese in 1902: French impressions of a Buddhist Country

Among the Burmese in 1902. French Impressions of a Buddhist Country
documents the travels of a Frenchman, member of the Académie française, undertaking a journey towards understanding the religions and customs of the peoples of the Indian Empire. This book gives an overview of his thoughts on the religious groups he meets in Burma. First he travels in Rangoon, where he visits various temples and areas of the city, then in Mandalay and further northwards on the Irrawaddy. His critical impressions are described in an unusual, impressionistic style without losing empathy for the plight of the ordinary Burmese. His insights also deal on a fundamental level of philosophical and religious inquiry with the influences exerted by western colonization, by the energetic onslaught of Chinese and Indian traders and a budding materialism among the Burmese. This is an unusual description by an unusually sensitive author.