Save for Later
SIMILAR BOOKS Show All
Huxley, Aldous

Jesting Pilate: the Diary of A Journey

Heart Must Break: The Fight for Democracy and Truth in Burma, The 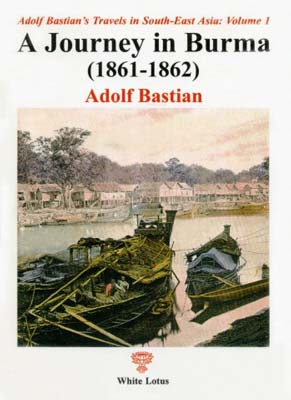 Volume 1 contains the travelogue written by Dr Adolf Bastian during his journeys in Burma. Bastian was a renowned ethnographer, who founded both the Ethnological Museum in Berlin and the Berlin Anthropological Society. In Burma he insisted on learning Burmese so as to obtain first-hand information about everything that struck his keen interest in the everyday and religious life of various ethnic groups. He traveled through Burma’s disputed areas, which were the subject of peace negotiations between the British and the Burmese king, just after the Second Burmese War had ended. Bastian held numerous talks with key British officials. Journeying on the Irrawaddy, he visited small towns and pagodas hidden from travelers to arrive at Pagan’s pagoda fields, where he spent time inspecting important monuments. We learn about many of Burma’s most beautiful pagodas, about its oil wells, about the role of Armenians in trade and the palace, about the religious customs of various ethnic groups, life in the bazaars, various types of fortune-telling, agricultural practices, forest products, dacoits and other criminals, omens and superstitions, American, French and Italian missionaries and their arguments with Buddhists, Burmese and European medical practices, the various forms of the Burmese language in use, and the inevitable celebrations. Bastian encountered Karen, Shan, Talein (Mon), Toungthu (Pa-O) and other tribal people, and visited the former Burmese capitals of Ava, abandoned Amarapura, and Mandalay. A forced longer stay in Mandalay, involving a string of audiences with the Burmese king, allowed him to paint a detailed sketch of the city, life in the countryside, and the idiosyncrasies of palace politics. At the king’s personal invitation, Bastian studied Buddhism while residing in the palace. Mandalay was then still in its infancy—an artificially created new capital away from English territory. Continuing his Journey on the River Sittang, he visited several provincial capitals. He also provides much about the influence of the Talaing, whom he calls the “Talein” (today’s Mon), and their vanishing language and culture. Eventually Bastian returned on the Sittang river to the Burmese coast, from where he traveled on via Moulmein to the Siamese border.
USD 27.50