Save for Later
SIMILAR BOOKS Show All
Anon

Road Past Mandalay, the: A Personal Narrative

On the Middle Mountain Range and Other Stories 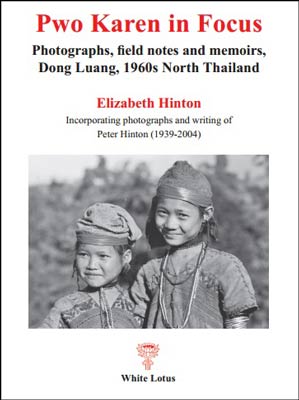 Pwo Karen in Focus: Photographs, field notes and memoirs, Dong Luang, 1960s North Thailand, records sixteen months in 1968 - 69 that anthropologist Peter Hinton and his wife Elizabeth spent in Dong Luang, a Pwo Karen village in the hills of North Thailand. Peter was specifi cally studying Karen swidden agriculture, but together they learned a lot else about Pwo Karen society. Part ethnography and part memoir, the book is an account, in text and photographs, of village life almost fi fty years ago. They saw the change of seasons, observed rice farming in the swiddens, and participated in weddings, funerals and village ceremonies. They became acquainted with village social organization, and with the spirits who underpinned Karen understandings of prosperity, health and wellbeing, illness and death. They saw houses being built of bamboo from the forest. The
self-suffi ciency of this subsistence society was impressive. But especially, the book tells how it actually ‘feels’ to do fieldwork – of the excitement of observing strange and exotic customs; of the cultural contradictions and clashes encountered; as well as the anxiety, confusion and the inevitable faux pas involved in living in an unfamiliar environment. Anthony R. Walker Ph. D (Anthropology) says, ‘Pwo Karen in Focus is an invaluable introduction for any student preparing to carry out fi eld-work of his own. It gives useful insights into the concrete realities of the practice of Anthropology