Save for Later
SIMILAR BOOKS Show All
TBC

Architectural Drawings of Temples in Pagan

Journal of Burma Studies Vol. 3: Rise of A Mainland Trading State: Rahkaing under the Early Mrauk-U Kings, C. 1430-1603, Robert Talbot Kelly and "Picturesque" Burma, Footnote to Burmese Economic History: The Rise And Decline of the Ar 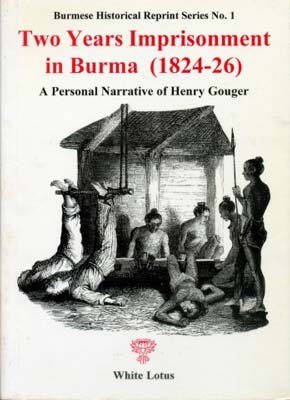 Gouger, a British merchant, witnessed at first hand the traumatic effects of the first Anglo-Burmese war on the Court and population of the Kingdom of Ava. He was jailed in Let Ma Yoon prison in Ava where he spent two years on death row, along with six others suspected of being spies, one of whom was Dr. Adoniram Judson, whose life and work is well documented elsewhere. The author offers a unique account of a crucial period in the history of Burma, which is valuable for historians, scholars, researchers and students alike. Having rendered his experiences into a book 35 years after the events, Gouger takes care to explain the local context, providing carefully selected and informative observations, with much thought for the Burmese themselves.
USD 22.00