With the Austrian Frigate Novara in the Nicobar Islands (1858) 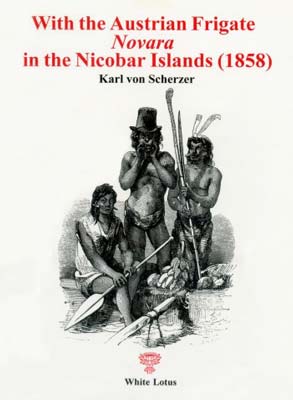 With the Austrian Frigate Novara in the Nicobar Islands (1858)

Excerpted from the popular version of a report by Dr Karl von Scherzer, a member of an extremely well-prepared, round-the-world expedition carried out between 1857 and 1859, and sponsored by the Austrian imperial government. The Nicobar Islands, now Indian territory, lay on one of the busiest shipping routes in the world, and yet not much was systematically recorded about the local population until well into the 20th century. These people, numbering not more than 6,000 in all, lived from coconut exports, and to a lesser extent from Pandanus trees, edible swallows’ nests and sea cucumbers. The staff of the Austrian expedition included geographers, geologists, and natural scientists, all of whom contributed to von Scherzer’s report. Von Scherzer himself was one of only a very limited number of Europeans to come into contact with the local people, except for ships’ captains, whose names the locals habitually adopted. Captain John Bull, a local chieftain who accompanied various Austrians around the southern islands of the archipelago, and other colorful indigenous people were contributing unwittingly to their own destruction because the expedition was looking for areas where Austrian colonial settlements could be set up. The Austrian naval officers on board the Novara also produced a score of first observations and an unproved navigational chart of the area, which is included here as a folded map. The book includes a short history of the foreign relations of the Nicobar Islands not found elsewhere.