Aesthetics of Power, the: Architecture, Modernity from Siam to Thailand

Save for Later
SIMILAR BOOKS Show All
Thomson, John

Straits of Malacca, Siam and Indo-China, The 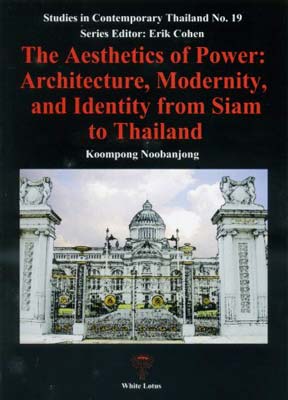 Aesthetics of Power, the: Architecture, Modernity from Siam to Thailand

Koompong, Noobanjong; The Aesthetics of Power : Architecture, Identity and Modernity from Siam to Thailand comprehensively examines the politics of representation in architecture and urban space from the 1850s to the present time. By utilizing the built environment as a mode of problematization for studying the Thai national and cultural identity ̶̶ ̶̶ known as Thainess or khwampenthai ̶̶ ̶̶ this book offers a broader discourse and generates debate on the political forms of architecture as well as on the architectural forms of politics. Divided into seven chapters with more than 150 illustrations, it investigates a number of buildings and public spaces that signify various types of power and function in terms of media par excellence for the constructions of khwampenthei. Encompassing many palatial, government, public, and commercial structures, the inquiries also incorporate the ways in which these built forms have been subversively resemanticized by several contesting social agents to achieve their political objectives. An innovative synthesis of architectural history and critical studies on contemporary Thailand, the book not only brings a fresh understanding of complex Thai society but illustrates how Thais have appropriated modernity together with Western material culture in creating and transforming their modern identity.